Bitdefender Versus Kaspersky | The Ultimate Battle [2020]

Bitdefender or Kaspersky, which antivirus software is a better pick in 2020?

Our experts have put together this comprehensive Bitdefender versus Kaspersky comparison to help you make a wise decision.

Anyone who goes onto the Internet without some antivirus protection is asking for trouble. Even when you limit your web surfing to known and trusted websites, the possibility remains that you could pick up a virus or some other type of malware.

The choice of an antivirus software package to safeguard your system is a critical one. It is not a matter to be taken lightly. Those who take adequate antivirus protection for granted often regret their oversight later on.

According to SafetyDetective.com, malware infections have been on the rise over the past decade. The United States is the top target for major incidents. And the situation is not getting any better.

Similarly, it has been estimated that a business will fall victim to a ransomware attack every 14 seconds in 2019. More worryingly, the duration is expected to further reduce to 11 seconds by 2021.

One mistake that people make is to depend on free software to deal with potential viruses. But there are two problems with that. First, free antivirus applications tend to lag behind paid software in the latest virus definitions. Second, premium antivirus software usually comes with a slew of additional functions and features to deal with a whole host of malware concerns.

So which premium antivirus software should you choose? It can be hard to decide. One way to figure out what to do is to compare individual antivirus programs side by side.

To help you with that, we’ve created a series of blog articles pitting one anti-malware package against another. This article compares two offerings that are both popular and critically acclaimed: Bitdefender and Kaspersky.

Here’s what we’ll cover in this Bitdefender vs Kaspersky comparison:

In a hurry? Take a look at the comparison to find out the winners in each category.

Features… Bitdefender offers a larger array of features within a much larger family of security products.

Anti-Malware Protection… Bitdefender was slightly ahead of Kaspersky in recent protection tests conducted by independent labs.

Impact on System Performance… Security products of both antivirus vendors perform equally well in this category according to independent evaluations.

User Interface… Both antivirus programs are easier to manage and navigate.

Popularity… Bitdefender takes a larger share of the antivirus market.

Customer Ratings… Both companies have average reviews from customers, but Bitdefender is slightly ahead of its competitor.

Features are probably the first thing one should look at to have a better overall idea about a product.

Bitdefender offers several security products for home users. Let’s discuss them one by one.

Bitdefender’s product line starts with its free version called Bitdefender Antivirus Free. This suite protects your PC against malware threats but doesn’t offer much in terms of advanced features.

The first paid offering from the company is Bitdefender Antivirus Plus, which includes some of the basic features that you would expect in a premium antivirus suite:

The next level of protection from the company is Bitdefender Internet Security. This package comes with a lot more features, including:

The full version of Bitdefender’s antivirus protection is Bitdefender Total Security, which promises complete security to protect you against any eventuality. The package comes with all the features mentioned above, plus several other protection, performance and privacy tools:

If you have a large family that needs anti-malware protection, then you should probably go for Bitdefender Family Pack. It offers the same features like the Total Security suite, but you can protect up to 15 devices with the family pack.

If you decide to go for the Total Security suite, you are opting for the best protection available out there. For lower tiers, Bitdefender offers specialized products for Mac, iOS and Android users. 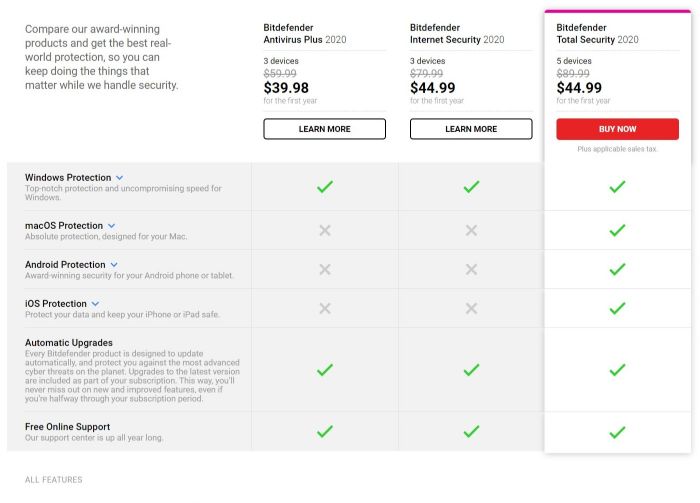 The first paid offering by the company is Kaspersky Anti-Virus. This basic version of Kaspersky offers essential system protection for Windows only. Its features include:

Next up is Kaspersky Internet Security, which supports PCs as well as Macs and smartphones. In addition to the above features, this package offers:

Another level up is Kaspersky Total Security, which includes everything mentioned above, plus three additional premium features:

The highest level of protection offered by the company for home users is Kaspersky Security Cloud. Its features include:

The Winner: Bitdefender. Bitdefender offers better and unique features, even with low tiers of coverage.

Malware, short for malicious software, includes any software that can infiltrate and damage a user’s computer system. That might consist of worms, viruses, adware, spyware, ransomware, trojan horses, or any piece of software code that could disrupt a user’s experience or steal or damage important data.

Therefore, detecting and removing malware is the primary job of an antivirus package. Let’s see how these two antivirus software vendors perform when it comes to defeating malware. The best way to find out is to see how independent testing labs rate these products.

One such lab is the Germany-based AV-Test Institute. It maintains an extensive collection of malware samples, which it employs in rigorous tests to assess the effectiveness of software security products.

In its latest Protection evaluation conducted in July-August 2019, AV-Test awarded both Bitdefender and Kaspersky a perfect 6/6 score.

Bitdefender was a star performer in both the latest evaluations, taking home 3-star ADVANCED+ award, which is the highest rating given by AV-Comparatives. 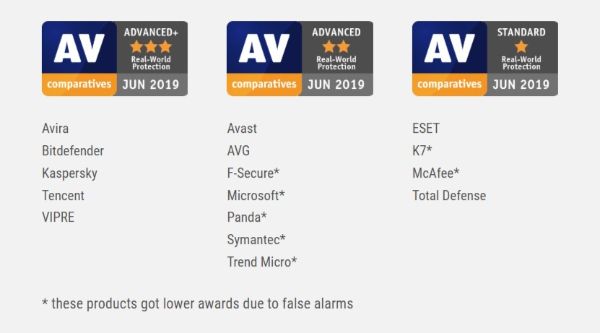 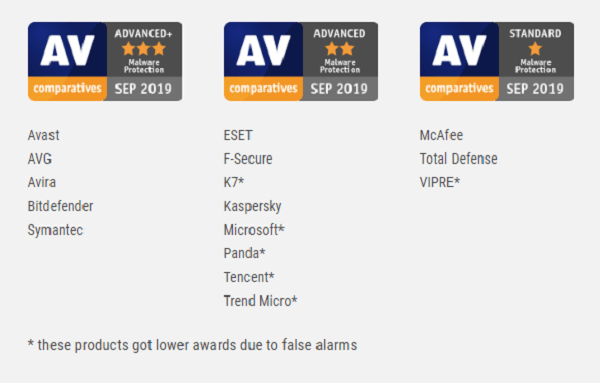 The Winner: Bitdefender. It was a tough competition. However, the fact that Kaspersky was bested by Bitdefender in one of the three tests makes the latter the winner of this category.

3. Impact on a System

Performance is another key measure while evaluating the overall usefulness of an antivirus software package. This may be especially true for antivirus programs, which generally run continually in the background.

Resident software like this can become a significant drag on system resources. Consequently, users may find their computers slow down considerably due to constant virus monitoring.

A July-August 2019 Performance assessment by the AV-Test Institute gives us an idea of how Bitdefender and Kaspersky impact their host computer systems.

Once again, both Bitdefender and Kaspersky aced the AV-Test evaluation with a perfect 6 out of 6 score, showing outstanding capabilities in the performance department. 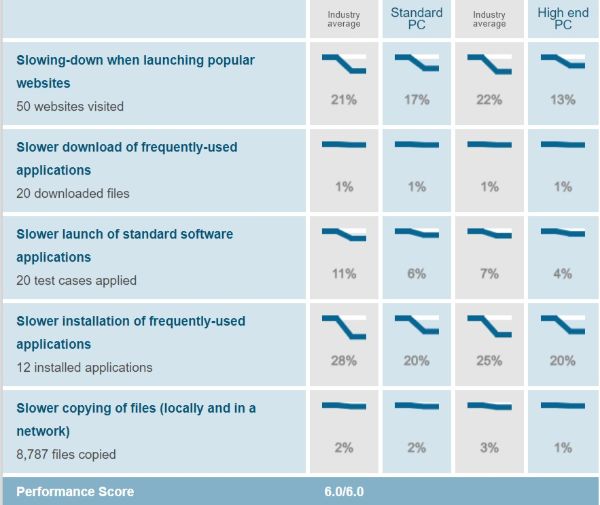 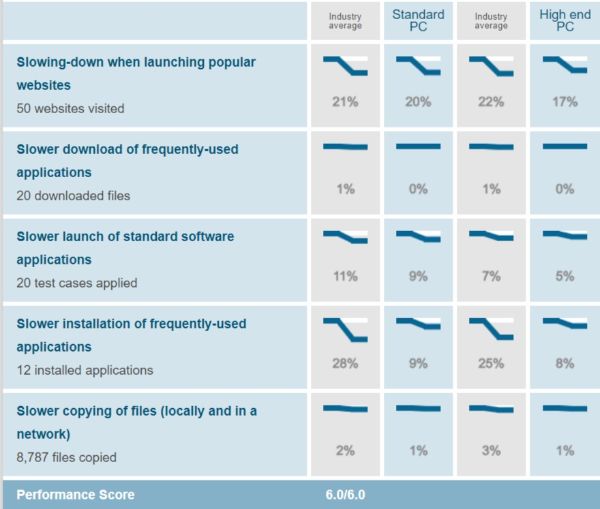 The results were no different in the AV-Comparatives’ Performance test, in which both antivirus companies were awarded the 3-star ADVANCED+ rating. 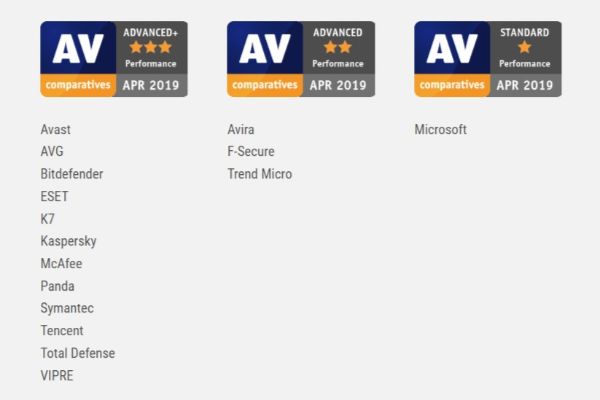 The Winner: Both. The two evaluations showed that both antivirus products have almost no influence of system resources.

What makes software user-friendly? The term has become a cliché, but it’s still an important factor when choosing from different software options.

A user-friendly application might be easy to install, easy to use and easy to remove. And when it comes to troubleshooting, user-friendliness means there are no unnecessary complications.

Just because a technology is sophisticated does not mean it has to be cumbersome. Easy to use is another term we might use as a synonym for user-friendly.

Bitdefender’s interface has an easy-to-use dashboard and menu system. From the main screen, you can see the status of your system plus a quick link to vulnerability recommendations.

You can also configure some blocks on the screen with links of your own choosing, such as Quick Scan, System Scan, or VPN. The Protection, Privacy, and Utilities menu choices also allow you to see similar blocks of system settings for further configuration of the software. 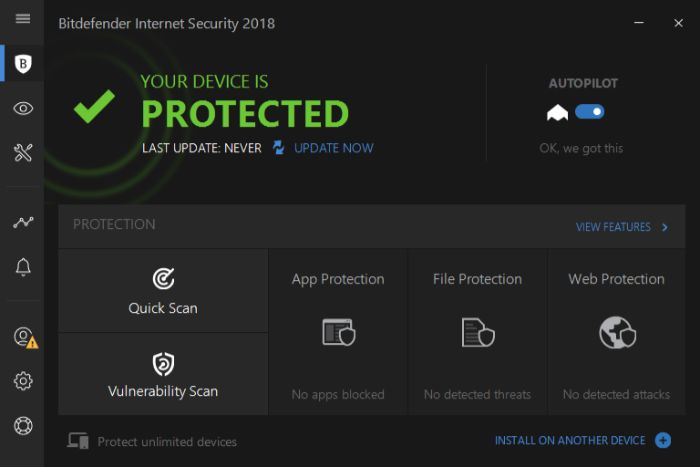 The Kaspersky interface is simple and easy to use. It’s not crowded, and you can see at a glance whether or not your system is fully protected. And if there are any problems, the software will make it clear with a bright red banner. 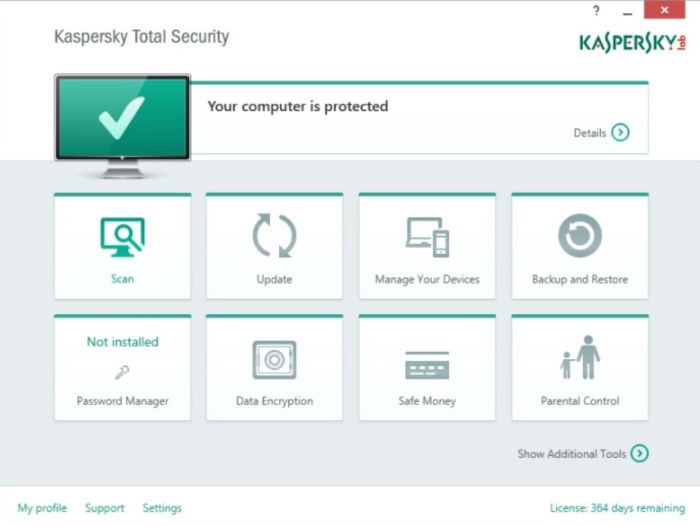 The Winner: Both. Both Bitdefender and Kaspersky appear to be good choices if you are looking for an antivirus product with good user experience. The designs are quite different, but both programs are easy to install and navigate.

The question of price, of course, depends on which level of service you are shopping for. One vendor may offer a bargain for the entry-level product but seem to charge way too much for the high-end offering.

The real question you need to ask yourself is: How much are you willing to pay for what you really want?

Let’s see how Bitdefender and Kaspersky price their products.

The Winner: Bitdefender. Bitdefender seems to have a slight edge over its rival, as you can protect more devices with less money through Bitdefender security suites.

The popularity factor is another metric that gives us some indication of a product’s value. If no one buys a piece of software at all, you would be wise to steer clear of it.

Let’s see which among Bitdefender and Kaspersky holds a larger market share according to independent survey reports.

According to the latest data released by security firm OPSWAT, Bitdefender holds a market share of 11.2% compared to 8.44% by Kaspersky.

According to another data-gathering company, Statista, Bitdefender’s market share at 10.17% is larger than Kaspersky’s 8.14%.

The Winner: Bitdefender. It is clear from both data sources that Bitdefender is more popular than Kaspersky.

Finally, let’s see how existing customers of both companies rate their products. Many third-party websites collect consumer feedback and issue a rating based on this. Two such sources are the Better Business Bureau (BBB) and Consumeraffairs.org.

First, we’ll check the BBB, which uses an A to F scale to rate companies. On this website, Bitdefender holds an average C rating, whereas Kaspersky is not rated by the BBB.

Another reputable consumer review source is Consumeraffairs.org, which gives ratings on a scale of 1 to 5 stars.

According to this website, both Bitdefender and Kaspersky hold a 3-star rating, indicating average customer reviews.

The Winner. Bitdefender. The fact that Kaspersky is not yet rated by one independent source gives Bitdefender a slight edge over it in this category.

While Kaspersky is a great product, Bitdefender stands as the victor in this head-to-head battle for supremacy. Bitdefender not only offers better features and malware protection, it also does so at lower price points than Kaspersky. Also, Bitdefender has a significantly larger market share than its competitor.